On Saturday 9 February, junior doctor Michael Nally – AKA Dr Mike on a Bike – will be setting off from Buckingham Palace on the first leg of a round-the-world cycle ride in aid of the RMBF and Mind. He hopes to raise £20,000 for the charities, and his trip will take in 22 countries and 19,000 miles over the course of eight months.

Mike kindly took time out from his busy schedule of work, preparation and training to tell us about his reasons for taking on the challenge, his hopes and fears for the trip, and why it’s so vital to support doctors under pressure.

Why did you decide to do something so bold to support fellow doctors?

When I was a foundation doctor, my friend told me about his colleague, also a junior doctor, who sadly took their own life. For me, this raised a lot of questions about what was happening in the system for doctors to feel that low. Then more recently, I came across a BBC article entitled “Doctors’ mental health at tipping point,” which looked at the growing numbers of doctors struggling with mental health issues. It also talked about Sophie Spooner, a paediatric trainee who tragically took her own life after experiencing mental health problems. Her mother, who was interviewed in the piece, explained that Sophie had struggled to find a mental health service that would have understood her problem in the context of being a doctor, and that if she’d had the right help, she would still be here. The story had a profound effect on me.

I remember my first tutor at UCL, Dr Philip Lodge, telling us about some of the problems faced by doctors, including the higher rates of mental health issues and substance abuse. This came as quite a shock, and it’s stuck with me since then. He also talked about ways to deal with these problems, and told us that ultimately, if we feel like we’re struggling, we should feel able to ask for help. Mistakes do happen, but we are often underprepared for how to deal with them or with other negative parts of the job. With everyone under so much pressure and with no slack in the system, it’s so important that this changes. To me, it seems perilous that so many of us can’t see why we’re doing what we’re doing any more, and that society does value us. We’re also very bad at asking for help when we need it.

How did you find out about the RMBF?

When I read Sophie Spooner’s story, I wanted to find a charity that supported doctors and I started asking around. Professor Deborah Gill, Director of UCL Medical School, was always a champion for the importance of mental health and wellbeing among the students, and she suggested I look into the RMBF. As soon as I visited the website, I remember it feeling like the perfect fit. It really hit the nail on the head. The RMBF helps all kinds of doctors in difficulty, and they understand the mental health pressures too.

Watching the videos of people’s personal stories really highlighted the fantastic work that the RMBF does. I was surprised that I hadn’t heard of the charity before, and it turned out most of my friends hadn’t either. They all know now, though – they’re wearing the t-shirts!

What do you want to achieve by cycling around the world as a junior doctor?

My first goal is to raise money and awareness for the increasing numbers of doctors under stress and pressure. There are so many positives to being a doctor, and being the person people turn to when they need mending. I want people to know that sometimes doctors need mending too, and if just one doctor can get some help as a result of me cycling round the world it will be worth it. 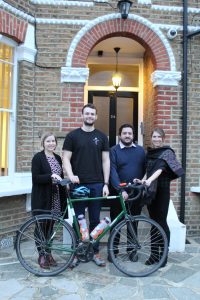 Dr Mike visited the RMBF offices and met the team

My second goal is to be a positive voice for medicine as a career. I’d love to have medical students following the trip, thinking ‘there’s a guy who loves his job!’ The press can be so negative, so it’s important to have positive voices out there. I’d like to be something of a champion for medicine – being open about the good and the bad.

It’s really important to be able to remember the great parts about being a doctor when dealing with stress and struggles. When something bad happens, so long as you know you’re doing the best job you can, it makes it a little easier to manage. If you already feel disheartened, with no concrete foundations of why you are doing what you are doing, you are less likely to be able to cope or ask for the help you need to bounce back.

What inspired you to cycle round the world?

I’ve always had a real affection for cycling. Dad and I were late starters when it came to driving, so we were often on our bikes instead. Wind, rain or shine, I was always on my bike, whether it was going to a rugby match or into town to see friends. Then more recently I heard incredible stories of people biking round the world. There was Mark Beaumont, the current world record holder, who cycled 240 miles a day for 78 days. And there was Alastair Humphreys, who was on the road for 4 years and has written some great books about his travels. I had this feeling that it was something I would always have an urge to do, and now seemed as good a time as any!

A bike builder in India said that “the world treats you in a different way when you are on a bike.” I think there’s a lot of truth in that. Cycling has all the benefits of walking, but quicker. You can do some serious distance on a bike, and at the same time still be able to really experience the places you are travelling through.

How far will you be cycling?

Are you feeling prepared?

No, not at all. I’m not too worried about training though. Quite a few people say the trip is training in itself, but I’m probably at my least fit right now. I’ve certainly been eating a lot more and training a lot less over Christmas! I definitely underestimated the amount of planning needed before the trip, and how nomadic I would be, travelling between London and Brighton so much for work.

I’m most excited about not having to think an awful lot. Once I set off, that’s it. I’ll just follow my nose and keep cycling. It should be a more simple life: every day, I’ll just get on my bike and go. In life there are so many things to juggle, so for 8 months, I’ll just be seeing the world and meeting new people. I can be a bit shy and awkward with new people at times so I’m hoping this will break me out of my shell.

I’m most apprehensive about the start. I do feel a bit underprepared and if something goes wrong in the middle of winter in Albania, or in far north India where you don’t get many tourists, it could be very serious. That said, I’ve never done anything like this before, so ultimately I don’t know what to expect.

One thing I’m certain about is loneliness. Even though it’s nice to be on your own, and be alone with your thoughts, it will be tough to cope with isolation for such long periods. It’s nice to be able to share and offload with other people, and for long stretches that won’t be a possibility!

Why do you think it’s important to champion having a career in medicine?

For most of my life medicine has been the only career I wanted to do. When I was younger, I wanted to be a paediatrician and work with children. Then when I went to med school, I felt on top of the world. It was only as I got towards the end of my degree that I felt that excitement start to waver. I was spending more time in hospitals and a lot of the doctors would be telling me, ‘oh, it’s tough’ or ‘you should have gone to work in the city’ which can be quite disheartening. But since I started as a trainee, I’ve had the best time. I feel so lucky to do what I do, and I feel incredibly passionate about medicine as a career, even if I’m still not certain exactly which direction I want to go in. It really gets me down seeing colleagues feeling low and disheartened, and not finding joy in what they do. I hold on to the fact that deep down, I love what I do and I know that medicine is right for me.

How would you advise someone thinking about a career in medicine?

Firstly, it’s a fantastic subject to study at university, and a career in medicine is truly fulfilling, with endless opportunities and choices. I would say though, do make sure you’ve done your research and you know what you’re getting into. Don’t do medicine just because other people want you to. Make sure it’s what you want to do! 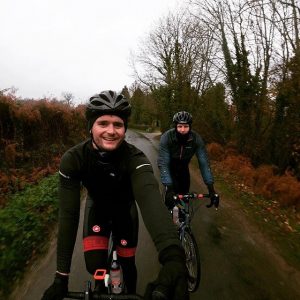 In training with close friend Charlie, who’ll be joining Mike for stretches of the trip

Go to a library and read online. See what kinds of career you could have and, if it feels right for you, have confidence in your ability. If medicine is something you’re passionate about, fight for it! My friend from home, who unfortunately didn’t get into medical school initially, went away and volunteered in South Africa at an orphanage. He came back and got a place to study medicine at UCL. He knew medicine was for him and didn’t give up. If people see your passion, it will get you places. You just have to keep fighting!

What would you say to a fellow doctor who is struggling?

Speak to someone. The worst thing is to feel weighed down and to try to deal with it yourself. I know when I’ve had issues, I’ve found it really helpful to talk to someone. Otherwise the pressure just builds and builds.

How can people support you?

The biggest thing people can do is to make a donation. It will really drive me on seeing how close I can get to £20,000! I’ve self-funded the whole trip from start to finish, so any money I raise will go straight towards supporting the Royal Medical Benevolent Fund and Mind.

Secondly, any words of support on Twitter and Facebook will mean a lot. If anyone feels like we have changed the dialogue or helped them in some way it would be great to hear from them. I’m going to be on my own a lot, so any emails or messages on social media will be great.

What will you miss most?

I’m going to be very lonely, so I’ll miss my girlfriend Jolie, my family and my friends the most. In my head, once I set off every time I pedal I’ll be bringing myself one step closer to home, so that’s how I’m going to look at it.

What’s the one thing that you won’t be leaving without?

I will have my lucky mascot Gemima, a stuffed penguin, taking pride of place on my handlebars.  Other than that I’d like an endless supply of freshly baked M&S cookies, but that may be wishful thinking!