During the current coronavirus crisis, we have been hugely touched by how many people have taken up fundraising activities, big and small, to help support doctors fighting the virus on the frontline. Here we round up just some of these efforts in order to say a big thank you – more people have been in touch with their activities, so look out for another update!

Over 200 people came together remotely during lockdown in memory of their friend Ottie, who was training to be a doctor when she died. Their aim was to run, walk and cycle 1,000km between them over the course of ten days to raise funds for the RMBF. 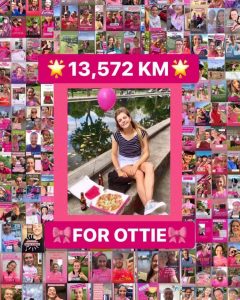 Donations began flooding in as the team clocked up the kilometres via socially-distanced exercise. Incredibly, the 1,000km target was smashed before the end of the second day! In the end, the combined distance covered was an astonishing 13,572km – that’s the distance from the UK to Australia – with over £11,000 raised for the RMBF. The sum will make a huge difference for doctors and medical students in crisis, and we’re absolutely blown away by such a positive and moving display of friendship.

Oxford band The Ideas also collaborated at a distance, recording and releasing an original rock anthem in aid of the charity. “Home (City of Dreaming Spires)” was recorded by band members Gary S Creigh, Steve Hare and Nick Aspey from their respective homes during lockdown, and all proceeds from the single’s sales and streaming go towards the RMBF.

The single was played on BBC Radio Oxford and reached #11 in Amazon’s new releases chart. It’s a fantastic tune – you can watch the video below and download now.

Stairway to the summit

When a planned expedition to summit Everest was cancelled due to the global pandemic, three climbers who were due to take the trip together decided on an innovative alternative. By climbing up and down the stairs in their own home, Lucy Aspden, Jenny Wordsworth and Rob Ferguson aimed to scale the equivalent height of the world’s highest mountain, as a fundraiser for doctors in need. 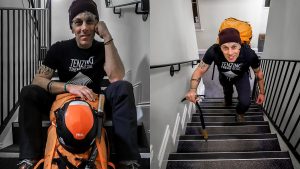 The vertigo-inducing challenge, supported by drinks company Tenzing who arranged the cancelled trip, has raised a fantastic £3,000 for the RMBF. Lucy wrote about the gruelling experience in the Telegraph travel section, while Rob was interviewed in the Metro and on Sky News.

15-year-old Mason wanted to do whatever he could to support doctors during the coronavirus crisis – after finding out about the RMBF via an internet search, he chose to shave his head in aid of the charity. Family and friends helped Mason raise £160 – a big thank you! 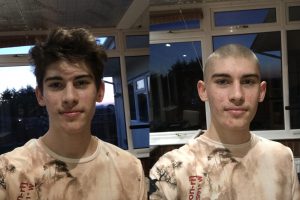 Mason wasn’t alone in going under the clippers, with Painswick Young Farmers also taking on the head shave challenge from home, raising over £400 and helping to keep spirits up in lockdown.

We couldn’t be more grateful to all our wonderful fundraisers. Your efforts will mean that we can support doctors, medical students and their families through times of serious hardship – both now and in the months and years to come. Once again, a huge thank you from everyone at the RMBF!