We talked to Diana about her time with the EDO, why they are supporting RMBF through their forthcoming London performance on 9 October, and about music’s wellbeing benefits. 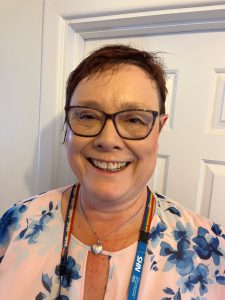 Q. What is the European Doctors Orchestra?

An orchestra made up of doctors from across Europe, around half from the UK. We meet two to three times a year in different European locations and put on a concert – last month we played in the Czech Republic.

There is a hectic schedule as we rehearse a full symphonic programme over the course of a weekend, the climax of which is a performance in a concert hall. This October, the venue will be Cadogan Hall in London, with the concert raising funds for the RMBF.

Q. What does it mean to you to be part of the EDO?

It’s really exciting being part of a symphony orchestra, and at a much higher standard than any amateur local orchestra I could be part of. The setup also works really well for busy doctors, especially those who work shifts.

I’ve been part of a local orchestra that meets weekly, rehearsing for a concert at the end of term, and found it a scramble to get to a regular practice session. With the EDO, you can practice the piece at home in your own time, and then take a few days’ leave, carving out the weekend for the rehearsals and performance.

Q: Can you tell us a bit about your EDO colleagues?

As a psychiatrist working in a mental health trust, it’s a wonderful chance to meet and play alongside all sorts of other doctors, who I might not meet in my day-to-day work. There are lots of GPs, surgeons, a gastroenterologist, a clinical geneticist: a real mix. Meeting and sharing our experiences of medicine is part of the excitement.

People who come to our performances love the idea that the whole stage is full of doctors. And we are all so passionate about the music, maybe more so than jobbing professional musicians – there is a real energy in our concerts.

Q: Self-care, wellbeing and resilience are vital for doctors. Can music help?

There is lots of evidence of music helping people relax and find peace. It’s often associated with helping people whose primary problem is a mental health issue. But it can also help if, say, you have a cardiac condition and you need to reduce your stress levels.

Being in an orchestra has the added benefit that when you’re rehearsing, you have to really concentrate on playing your instrument. Whatever you’re stressed about – that team you’re trying to turn around at work, or that patient you’re really worried about – you are forced to forget about it all and focus on the music. It can be quite cathartic, and offer a complete break and release away from the pressures of work.

I hear from a lot of people how important music has been for their wellbeing during the pandemic lockdown. People’s lives were quite impoverished in terms of variety and activity. Music was still available and could provide that enrichment.

You also have music therapy which is a more specialist thing. It’s principally used for patients who might really struggle to communicate their issue verbally.

Q. We’re delighted the EDO are supporting the RMBF. Why is the charity important to you?

The fact is we all know doctors who are having problems or have encountered hard times. I know when I was a junior doctor, I had to pay for childcare for two children and I barely profited from going to work. I had a husband who was earning and I knew by continuing to work I would build my career for the future. If any other problem had hit us at that time, say if my husband had an accident or illness and had been off work – well, we would have been in trouble.

I know someone who had a horrendous time with cancer and needed her jaw reconstructed. She couldn’t work – you can’t be a psychiatrist and talk with slurred speech. We all know people who, through whatever circumstance, things have gone seriously wrong in their lives. That is why the RMBF is so important in providing a safety net.

Through this concert we want to raise as much money as possible for doctors, medical students and their families who are facing hardship. I would urge all your supporters to buy a ticket, and come and enjoy the performance!

Tickets are now on sale for this fantastic event on Sunday 9 October: featuring music from Walton, Shostakovich and Berlioz, with conductor Grant Llewellyn and violin soloist Hyeyoon Park.