RMBF’s Chief Executive Steve Crone reflects on your choice for “The Doctor’s Doctor”, and what support we need to offer medics working under pressure 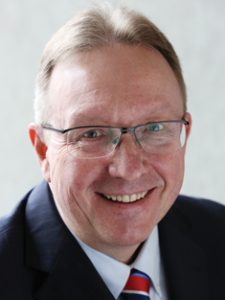 As part of the RMBF’s Together for Doctors campaign, we wanted to celebrate those in the profession who, throughout history, have made a real difference to the working lives of their colleagues in medicine. Our Trustees proposed a ten-strong shortlist of nominees for “The Doctor’s Doctor”, spanning nearly 200 years of medicine: from pioneering women like Dr Sophia Jex-Blake, instrumental in the fight for women’s access to university, to social reformers like Sir Charles Hastings.

When we invited our supporters to vote, there was one doctor whose work clearly struck a chord more than any other: Dr Kate Granger MBE (pictured above). Now a household name in the medical profession, Kate very sadly died of cancer in 2016. During her treatment she started the Hello My Name Is campaign in 2013 with husband Chris Pointon, in an effort to encourage healthcare staff to introduce themselves before administering care.

To call the campaign a success would be a huge understatement. Rapidly going viral on Twitter, the simple idea was incredibly warmly received by doctors and other healthcare staff, who pledged in their thousands to introduce themselves by name to patients, and encourage their colleagues to do the same. In recognition of its impact, Kate became the first ever doctor-in-training to be elected as a Fellow of the Royal College of Physicians, and NHS England created the Kate Granger Awards for Compassionate Care. She was awarded an MBE in the 2015 New Year Honours for services to the NHS and improving care. The campaign continues apace after Kate’s death, because the goal of improving quality of life for both patients and doctors remains an essential one.

Campaigns based around small ideas that make a big difference I think exemplify the problem-solving spirit that doctors put to use in their everyday working lives. And the supportive reaction to them across the medical profession demonstrates that doctors, a practical bunch, know to adopt a good idea when they see one. Indeed, Kate Granger’s legacy is a simple personal greeting, but one that makes a world of difference to patients and healthcare professionals alike.

Another recent campaign is very reminiscent. In an effort to reduce mix-ups in the operating theatre, where a second’s delay can have serious consequences, Australian anaesthetist Dr Rob Hackett made what he called an “awkward” decision to write his name and role on his scrub cap, and the Theatre Cap Challenge was born. Again, it was widely shared on Twitter, enthusiastically embraced by doctors across the world.

This instinct for improving care by any means possible is heartening, and it should be celebrated and supported. However, we must also listen when doctors tell us what other changes would make a positive impact, those larger-scale changes that cannot be provided through the ingenuity and goodwill of doctors alone.

Our Together for Doctors survey, which garnered over 1,800 responses, included a question about what environmental changes would make the most difference to a hospital doctor’s working day. The most popular responses were more administrative support, better rostering, access to parking and access to a relaxing staff room or communal area. A lack of these practical necessities can mean that the problems and stresses inherent to a high-pressure career like medicine are further compounded.

At our Grants and Awards Committee, we hear first-hand accounts of what happens when doctors lack the support and facilities they need. Over the past decade or so, the proportion of our beneficiaries who are in difficulty because of mental health problems has steadily risen. Stress, burnout, depression: the list of difficulties faced by our beneficiaries is one more piece of evidence that these are real and urgent issues for the profession.

The RMBF will continue to be there when doctors face crisis – and one small action that makes a big difference is to tell your medical colleagues about the support we offer, so that they know where to turn if the worst happens. But now more than ever we need to listen to doctors on the front lines when they tell us about the pressures they face, and the practical changes that could be made to alleviate them, before that crisis point is reached.